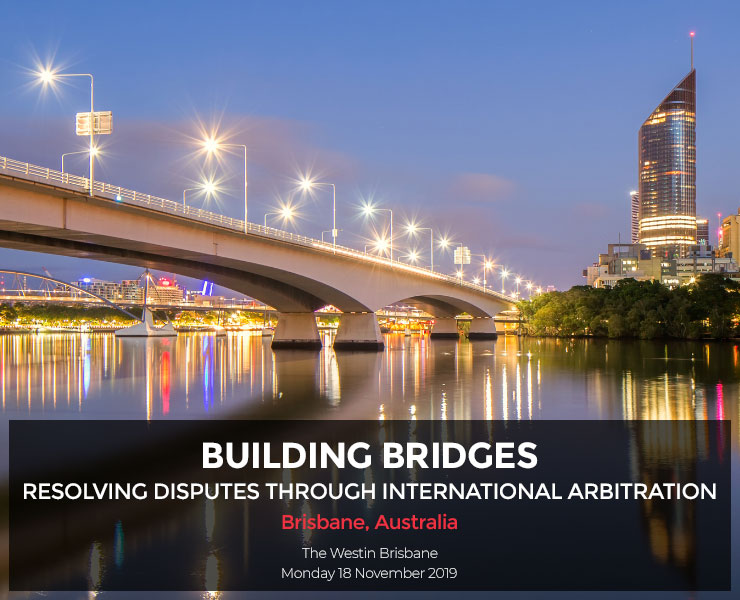 On 18 November 2019, arbitration practitioners from around the world convened at the Westin Brisbane to attend the 2019 International Arbitration Conference, organised by ACICA and CIArb Australia.  The conference, which saw practitioners from 5 continents and 15 jurisdictions impart their knowledge and experience, was a wonderful success.

The conference was opened by the Honourable Chief Justice Holmes. Her Honour was followed by the Honourable Justice Keane AC who gave the keynote address. His Honour advocated for “quality control” of the arbitration process to ensure its success.  His Honour said that the quality of decision-making is (naturally) just as important to parties who have chosen arbitration as it is to those who have chosen litigation, and that competence and diligence should be the goal of every arbitrator.  To take an approach, as arbitrator, which “gives a bit each way” is, his Honour said, inimical to the arbitration process.

The first session of the day, chaired by John Arthur, went around the globe, focusing on current trends in international arbitration in the Middle East and parts of Asia.  Anne Hoffmann said that arbitration is fully accepted by users in the Middle East; the hotspot of arbitration being the UAE and specifically, Dubai. Ms Hoffman then spoke to some of the features of the new UAE law.  Meg Utterback spoke to developments in China including the 2019 Framework Plan which permits foreign arbitral institutions to register in mainland China.

Sheila Ahuja said that a lack of reliability and consistency in the courts in Indonesia, India, Malaysia and Japan makes arbitration in those jurisdictions a strong choice.  However, she identified hurdles in these countries.  The Indonesian arbitration law does not adopt the Model Law. Recent amendments to India’s arbitration law are thought to be confused and India has only chosen to enforce arbitral awards from arbitrations with 59 (of the ~160) countries who are party to the New York Convention.  Japan has some way to gain international reputation. And the Malaysian courts do not offer reliable or efficient judicial support for arbitration in that country.

The second session featured a conversation with Paula Hodges QC, led by Caroline Kenny QC.  Ms Hodges spoke about a distinguishing feature of the LCIA Arbitration Rules (Articles 18.5 and 18.6) which ensures that counsel complies with certain ethical standards contained in the Annex to the LCIA Rules, and which gives tribunals the power to investigate alleged violations of the standards and impose certain sanctions in relation to any such violation.  Ms Hodges explained that it was important, as an institution, to “regulate ourselves” and not be reliant on arbitrators to import the IBA’s ethical guidelines.

In Session Three, we heard about arbitration in the energy and resources industry.  The session was chaired by Jeremy Quan-Sing who revealed that a WA Arbitration Initiative which looked at the nature of arbitration activity with a WA connection in the 2017/2018 financial year, concluded that 75% of all reported arbitrations related to either the construction or oil & gas and mining industries.  Georgia Quick spoke about arbitration in the renewables sector and said that arbitration needs to stay “fresh and relevant”. Russell Thirgood spoke, in part, about climate change and the likelihood that climate change (specifically, the right to a safe and clean environment) will generate a new wave of human rights issues.

Kanaga Dharmananda QC raised three interesting points in the context of expert evidence.  First, ought there be standards around the disclosure by experts of previous arbitral involvements? Secondly, how do we ensure experts get the documents they need before they provide their opinion?  Thirdly, where (for reasons of cultural upbringing) parties take a different approach to the treatment of experts and the preparation of witness testimony, how do we ensure there is no consequential imbalance in the hearing? Should the issue be addressed by way of a procedural direction soon after the tribunal’s constitution?

The difficulty of finding technical experts, who are not over utilised, was also raised.  A comment from the floor informed us that the Expert Witness Institute in London now has a Singapore arm, which many may find useful.

Session Four focused on China’s One Belt, One Road initiative. This session was chaired by Chan Leng Sun SC.  Dr Fuyong Chen spoke to us about China’s International Commercial Court, which has two branches: one in Shenzhen to deal with disputes arising out of the BRI maritime road; and one in Xi’an to deal with disputes in relation to the overland Belt. Dr Chen also introduced us to the BAC Arbitration Rules 2019. Olga Boltenko spoke about China’s treaty policy and the proliferation of dispute resolution centres.

After lunch, we were treated to dispute-specific panels. First, Professor Jenni Lightowlers chaired a panel on the arbitration of IP disputes.  Traditionally, IP disputes have not been arbitrable and IP rights have only been enforced through litigation.  However, as a national court can only adjudicate on disputes within its jurisdiction and IP disputes are almost always a multi-jurisdictional issue, this was unsatisfactory as it meant a claimant had to litigate in multiple jurisdictions.

We learned that Hong Kong has enacted legislation dealing with the arbitrability of IP disputes. Dr Rouven Bodenheimer also considered that there was room for the infringement of IP rights to be the subject of a dispute under an investment treaty.  Winnie Tam SC explained that arbitration in this area is not without its limitations. Of course the relevant parties must have previously entered into an arbitration agreement. And any award would not have a legal impact on the rights of non-parties. So to the extent that a party wants “vindication pronounced to the world”, that party may not be satisfied with a confidential outcome.

The next panel hosted a very interesting session speaking to many different issues in the context of the arbitration of M&A deals, such as the production of documents, the appropriateness of expert determination where the remedy sought is a valuation or price calculation exercise, and how tribunals who are unfamiliar with concepts such as ‘without prejudice’ and ‘calderbank offers’ deal with such concepts. The session was chaired by Justin McDonnell.

Paul Sandosham cautioned against choosing one institution to administer another institution’s arbitration rules, and spoke about the Alstom Technology experience.

The next session concerned construction & infrastructure disputes, chaired by Sandy Thompson QC.  Stephen Hibbert treated the audience to a wonderful overview of the Qatar rail – Doha Metro, complete with a short video. Mr Hibbert also shared with us a rather novel feature of an arbitration agreement in that Project which provided that any arbitration would be delayed until the end of the Project, even if the contract was terminated. Frances Williams advised lawyers to be flexible in the use of memorials versus pleadings, and considered stop-clock arbitrations to be a worthy process to cut through the inefficiencies of arbitration. Gitanjali Bajaj agreed: stop-clock arbitration makes you focus and put the real issues in dispute to the real witnesses.

The final session of the day concerned the appointment of arbitrators from an institutional and a corporate perspective.  The session was chaired by Professor Doug Jones AO.  Matthew Gearing QC demonstrated that the statistics show that institutions are driving diversity more than the parties, and that the LCIA, in particular, is leading the charge.  The corporate perspective was given by Scheherazade Walter. Ms Walter explained perfectly the apparent reluctance on the part of parties:  the client is interested in this arbitration. It is not interested in furthering the cause of diversity for the good of arbitration more generally.

Caroline Kenny QC and Brenda Horrigan gave the closing address, and then the delegates headed pool-side for a cocktail networking reception.  It was a thoroughly enjoyable and rewarding conference shared with many from around the globe.