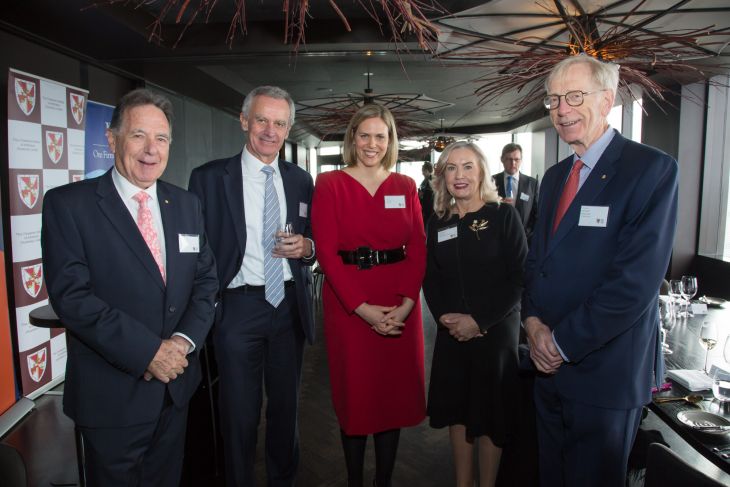 Your honours, distinguished guests, ladies and gentlemen, as President of CIArb Australia, I am very pleased to welcome you to the 2019 CIArb Australia Business Lunch and to introduce our guest speaker, Leah Ratcliff.

I am pleased to say that this lunch sold out within days of it being announced. I am grateful for the support of the various legal and government institutions, corporates, financial institutions and law firms who are here today from Victoria and interstate. I would like to particularly acknowledge the presence of current and former judges from the High Court, Supreme Court, Family Court, Federal Court, and County Court, Prof Graeme Samuel AC, former Commissioner, The Hon Kenneth Hayne AC QC and former member of the Victorian Bar, ASIC Deputy Chair, Daniel Crennan QC. In addition, I would like to thank our sponsors, the Victorian Bar who is represented in these proceedings by Senior Vice President, Wendy Harris QC and Jones Day for supporting the lunch. I would also like to thank our CEO, Gianna Totaro, for her hardwork in organising today.

Before introducing Leah, I wanted to briefly touch on a few developments and observations in international arbitration. As reported by Austrade in 2018, international commercial arbitration is a vital part of doing business in the global economy, and is effective in managing commercial relationships and risk. The past decade has seen an increase in the use of arbitration, particularly in the Asia-Pacific region. This is largely due to the significant growth of the Australian and Asian economies and their increased participation in global commerce. In March 2019, Australia and Indonesia signed the Australia-Indonesia Comprehensive Economic Partnership Agreement and Australia and Hong Kong signed the Australia-Hong Kong Free Trade Agreement Both agreements provide for disputes to be resolved by arbitration.

Arbitration, be it domestic or international, is increasingly the dispute resolution of choice across a range of different sectors. Of particular interest to our guests from the Family Court, Chief Justice William Alstergren and Justice Josh Wilson, Australia is leading other countries in the region in the promotion and use of arbitration to resolve the financial aspects of family disputes. It is the only jurisdiction in the region to allow arbitral awards to be registered, giving them the same effect as a court judgment. Arbitration is particularly useful if there is a discreet issue impeding resolution of a family dispute, such as the division of assets. It is a streamlined, quick and cost-effective process in the family law arena.

On the other side of the spectrum, we were pleased to see Prof Samuel as Chairman of the industry group, Airlines for Australia and New Zealand (A4ANZ) advocating for “final offer arbitration” in disputes involving airports, an ADR process commonly used in various sectors in Canada and the United States.

At our annual dinner last year, Australian businessman, Allan Myers AC QC reminded the audience that Australia had the finest infrastructure in the world with which to arbitrate disputes. He also said that, and I quote, “Australian lawyers and professional people who are engaged in activities connected with alternative dispute resolution are among the most capable in the world.”

What an appropriate segue to introduce you to our guest speaker, Leah Ratcliff who will deliver her address The Future Significance of International Arbitration

Leah is a leading dispute resolution practitioner with a particular focus on complex cross-border disputes including international arbitration. Before joining Jones Day in March, from 2015 – 2019, she was Head of Dispute Resolution at BHP, one of the world’s leading energy and resources companies, where she managed disputes and contentious regulatory matters across four continents. Prior to that she practiced in international dispute resolution in London, Sydney and Washington DC where she acted for some of the world’s largest companies, as well as government entities. Her practice has a particular focus on the energy, resources and infrastructure sectors, including the management of business risks in emerging markets.

In addition to her professional accomplishments, Leah is the recipient of multiple awards and recognitions, including the Chetwood Prize from Georgetown University, and the Civil Justice Award for Private International Law from the Attorney-General’s Department. She is a also graduate of Women on Boards’ Next Generation of Female Corporate Leaders program of 2016.

Ladies and Gentlemen, will you please join me in welcoming Leah Ratcliff.