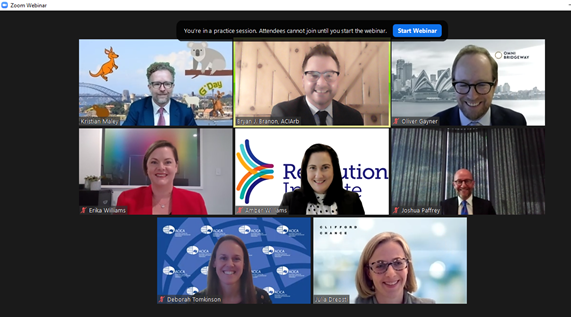 The Chartered Institute of Arbitrators (CIArb) Young Members Group (YMG) “World Tour” is a series of seminars hosted by YMG across different regions worldwide. On 24 and 25 March, arbitration and dispute resolution experts from Australia and New Zealand came together for two lively panel discussions as part of the YMG World Tour itinerary. This event was co-moderated by Julia Dreosti, Counsel at Clifford Chance, and Kristian Maley, Senior Associate at Clifford Chance.

“The Here and Now: ADR Trends in Australia and New Zealand”

The first panel discussion focused on how arbitration and ADR have been affected by COVID-19.

Kicking off the discussion, Amber Williams, CEO of the Resolution Institute, identified that the “shift to online dispute resolution (ODR) had been quite prolific”, with an initial high demand for ODR training programs. This was echoed by Sue Wells, Executive Director of AMINZ, who reported that her organisation had transitioned its courses online, and created a community space for members to discuss and support one another.

Deborah Tomkinson, Secretary General of ACICA, highlighted the institution’s focus on clear communication between parties to a dispute and awareness of parties’ circumstances. The institution has developed a suite of education programmes and guidance notes to address issues facing practitioners in ODR. Currently, cases at ACICA are proceeding mostly in either an online or hybrid form, with some larger matters being deferred until in-person hearings become available.

Oliver Gayner, Senior Investment Manager at Omni Bridgeway, asked the panel whether the pandemic was an opportunity for ADR to gain a greater market share. The panel largely agreed that such opportunities presented but acknowledged that the strength and reliability of Australian and New Zealand Courts resulted in less ‘push motivations’ than other jurisdictions. Joshua Paffey, Partner and Head of International Arbitration at Corrs Chambers Westgarth, discussed the opportunity to relieve pressure on the courts and provide for flexible hearing times and evidence presentation.

Erika Williams, an independent international arbitration practitioner, highlighted the importance of maintaining due process and equality between parties, noting recent judicial decisions indicating that technical difficulties alone would not be enough to frustrate this. Further, it was observed that there is no general right to a physical hearing in International Arbitration. Kristian Maley noted that the 2021 ICC Rules have deleted the former Article 25(2), which on one view required an in-person hearing if requested by either party. Ms Williams also noted the benefits of technology to virtual hearings, which can allow parties and arbitrators better access and view of evidence.

Throughout the event we heard of the benefits of virtual hearings and their positive impacts, but the panel also acknowledged some of their shortcomings. A survey from the Resolution Institute found that 27% of respondents felt that online mediation was less effective than face to face mediation. Mr Gayner echoed this sentiment, stating that fewer disputes had been successfully settled during the pandemic due to barriers to in-person meetings, though there has been some benefit to removing geographical barriers.

For now, it seems the benefits outweigh the costs, and virtual hearings will be around awhile longer, either purely online, or through a hybrid model.

“Appeals in arbitration – to be or not to be?”

That was the question answered in the World Tour’s second session in Australia and New Zealand. Russel Thirgood, Independent International Arbitrator, opened the discussion by outlining the availability of appeals in arbitration in different jurisdictions across the globe, and the pros and cons of the various approaches.

Catherine Green, Executive Director of NZIAC, provided insight into the appeal mechanism established by the Arbitration Act 1996 (NZ). Schedule 2, Article 5 of Act allows appeals to the NZ High Court on questions of law arising out of awards. The appeal mechanism only applies to a New Zealand-seated international arbitration if the parties have agreed (an “opt-in” basis), and applies to a domestic arbitration unless the parties agree otherwise (an “opt-out” basis). Since appeals through this process are in the public domain, AMINZ also administers an Arbitration Appeal Tribunal (AAT) providing confidential appeals on questions of law. Citing data compiled by NZIAC, Ms Green said very few awards were appealed over the past decade before the Court or the AAT. Of appeals brought before the Court, only about 30% were successful.

The Hon Paul Heath QC emphasised the primacy under the UNCITRAL Model Law on International Commercial Arbitration of party autonomy. This was seen as consistent with the appeal mechanism under the New Zealand Act, since it applies to an international arbitration governed by the Act on an “opt-in” basis only.

Hon Dr Annabelle Bennett AC SC questioned whether appeals from a three-arbitrator tribunal to a single judge would necessarily be effective or appropriate. The arbitrators may have specific technical expertise relevant to the dispute, whereas a judge may not have such expertise. Further, certain factors or obligations that do not arise for arbitrators may bear on a judge’s decision, such as obligations to the development of the law, and principles of comity.

Dr Sam Luttrell, Partner, Clifford Chance, provided his insight as a specialist in Investor State Disputes Settlement (ISDS). Dr Luttrell explained the value of confidentiality, expertise, and an enforcement regime for parties to international arbitration. For ISDS claimants, there is typically no viable alternative forum available, as parties are unable to trust the national courts implicated in their transaction. Therefore, they are not consciously opting out of litigation in the same manner as other commercial disputes, and the implementation of an appeal process would not frustrate the functionality of arbitration in this context. However, Dr Luttrell also acknowledged that the ISCID system was created with a tolerance for ‘substantive incorrectness’. Dr Lutrell referred to Aron Broches, the original architect of the ICSID system, who stated that legal incorrectness was an inherent risk that parties consented to when accessing the system. Nevertheless, the drafters still actively chose not to include a right to appeal, rather opting to include an annulment framework in Article 52 of the ICSID Convention.

Brigid O’Neil, Principal, BON Advisory, drew on her commercial experience as in-house counsel to argue against appeal rights. Ms O’Neil emphasised the importance of efficiency and finality, which appeals would diminish – a view shared by some other panellists. Providing a counter-view Duncan Watson, Partner, Quinn Emanuel, outlined a framework for appeals in arbitration and stressed the importance of party autonomy in enabling parties to include an appeal clause in their agreements, especially for large-scale international disputes.

Panel members expressed a range of contrasting views about the merits and pitfalls of rights of appeal against arbitral awards. While this prevented the panel from finally resolving the vexed question of arbitral appeals, it enabled a lively exchange of competing perspectives, and illuminated the many legal and practical issues raised.